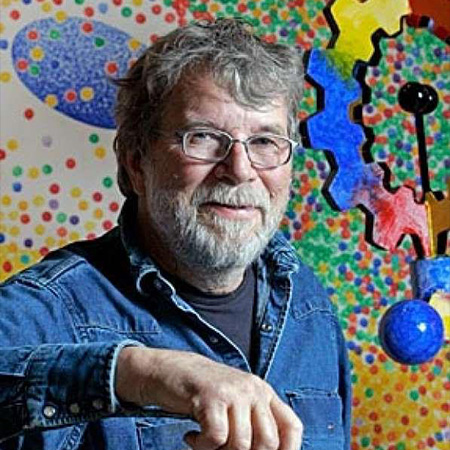 An archetypal Bay-Area artist, Robert Hudson has been a primary force in the West Coast assemblage movement, and is well known for his polychrome steel sculpture. Born in Salt Lake City in 1938 and raised in Richland, Washington alongside artists William Allan and William Wiley, Hudson moved to San Francisco in the late 1950s where he received his Bachelor’s and Master’s of Fine Arts from the San Francisco Art Institute. Working in a wildly diverse array of mediums, Hudson has produced a large body of paintings, drawings, ceramic pieces and his famous steel sculptures in a career that continues to evolve over five decades of creativity. According to David S. Rubin of the San Francisco Art Institute, “Hudson demonstrates an adventurous spirit as he continues to challenge barriers that have traditionally existed between mediums.” His willingness to experiment with and explore new materials and techniques has allowed him to forge an authentically original style that draws on a range of influences, without subsuming his identity to any of them.